Molossian normal type, mesomorphic and macrothalic, within the desirable proportions without gigantic dimensions. Its aspect is harmonic and vigorous due to its powerful muscles which stand out under the consistent and elastic skin adhered to the body through a not very lax subcutaneous tissue. It walks quietly but firmly, showing its intelligence and quick responsiveness and revealing by means of his movement his permanent happy natural disposition. Of a kind and loving nature, of a striking whiteness, its physical virtues turn it into a real athlete.

It is cheerful, frank, humble, friendly, and not a hard barker, always conscious of its power. It should never be aggressive, a trait that should be severely observed. Its domineering attitude makes it continuously compete for territory with specimens of the same sex, most noticeable behaviour in males. As a hunter, it is smart, silent, courageous and brave. 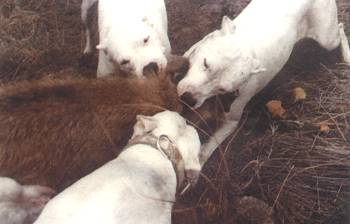 Of mesocephalic type, it looks strong and powerful, without abrupt angles or distinct chiselling. Its profile shows an upper line which is concave - convex : convex at the skull because of the prominence of its masticatory muscles and its nape; and slightly concave at the foreface. The head joins the neck forming a strong muscular arch.

Skull: Compact, convex in the front to back and transverse direction. Its zygomatic arches are far apart from the skull, forming a large temporal cavity which enables the large development of the temporal muscle. Its occipital bone is not very prominent due to the strong muscles of the nape. The central depression of the skull is slightly noticeable.
Stop: Slightly defined, as a transition from the convex skull region to the slightly concave foreface. From the side, it shows a definite profile due to the prominence of the superciliary ridges.

As long as the skull.
Nose: Ample nostrils. Black pigmentation. It is slightly elevated forwards, finishing off the concave profile of the muzzle. From the side, the front line is perpendicular and straight, coinciding with the maxillary edge or slightly projected forward.
Muzzle: Strong, a bit longer than deep, well developed in width, with sides slightly converging. The upper line is slightly concave, an almost exclusive trait of the Argentinean Dogo. Lips: Moderately thick, short and tight. With free edges, preferably with black pigmentation.
Jaws/Teeth: Jaws strong and well adapted; no under-or overshot mouth. The jaws should be slightly and homogeneously convergent. They ensure maximum bite capacity. Teeth big, well developed, firmly implanted in line, looking clean without caries. A complete dentition is recommended, priority being given to the homogeneous dental arches. Pincer bite, though scissor bite is accepted.
Cheeks: Large and relatively flat, free from folds, bulges or chiselling, covered by strong skin.
Eyes: Dark or hazel coloured, protected by lids preferably with black pigmentation though the lack of pigmentation is not considered a fault. Almond-shaped, set at medium height, the distance between them must be wide. As a whole, the expression should be alert and lively, but at the same time remarkably firm, particularly in males.
Ears: High and laterally inserted, set well apart due to the width of the skull. Functionally, they should be cropped and erect, in triangular shape and with a length which does not exceed 50% of the front edge of the auricle of the natural ear. Without being cropped, they are of mid-length, broad, thick, flat and rounded at the tip. Covered with smooth hair which is a bit shorter than on the rest of the body; they may show small spots, not to be penalized. In natural position they hang down covering the back of the cheeks. When the dog is alert they may be half-erect. 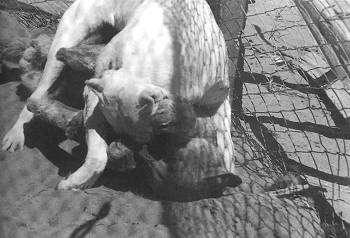 Of medium length, strong and erect, well muscled, with a slightly convex upper line. Truncated cone-shaped, it joins the head in a muscular arch which hides all bony prominences in this part, and fits to the thorax in a large base. It is covered by a thick and elastic skin that freely slips over the subcutaneous tissue which is a bit laxer than on the rest of the body. It has non-pendent smooth folds at the height of the throat, a fundamental trait for the function of the animal. The coat in this part is slightly longer than on the rest of the body.

The length of the body (from the point of the shoulder to the point of the buttock) exceeds the height at the withers by 10%.
Upper line: Level; the withers and the pin bones of the croup are at the same height, constituting the highest points.
Withers: Large and high.
Back: Large and strong, with fully developed muscles forming a slight slope towards the loins.
Loins: Strong and hidden by the developed lumbar muscles which form a median furrow along the spine. Slightly shorter than the dorsal region, rising very slightly to the top of the croup. The development of muscles in the parts of the upper line causes the dogs to show a slightly depressed profile without being actually so, which is enhanced in adults due to the fully developed dorsal and spinal muscles.
Croup: Of medium length, large and muscular; slightly showing the tips of both ilium and ischium. Its width is equal or a bit less than that of the thorax; the angle to the horizontal is of about 30°, thus the upper line falling in a slightly convex slope towards the insertion of the tail.
Chest: Broad and deep. The tip of the breastbone is level with the tip of the shoulder joint (scapulo-humeral joint) and the sternal line of the thorax is level with the elbow line. Large thorax providing maximum respiratory capacity, with long and moderately curved ribs which join the breastbone at the height of the elbow line.
Abdomen: Slightly tucked up beyond the bottom line of the thorax, but never greyhound-like. Strong with good muscular tension as well as in the flanks and loins.

Set medium high, with 45° angle to the upper line. Sabre- shaped, thick and long, reaching to the hocks but not further down. At rest it hangs down naturally; when the dog is in action, it is slightly raised over the upper line and constantly moving sidewards. When trotting, it is carried level with the upper line or slightly above.

As a whole, they form a sturdy and solid structure of bones and muscles, proportionate to the size of the animal. Forelegs straight and vertical, seen from the front or in profile.
Shoulders: High and proportioned. Very strong, with great muscular contours without exaggeration. Slanting of 45° to the horizontal.
Upper arm: Of medium length, proportionate to the whole. Strong and very muscular, with an 45° angle to the horizontal.
Elbows: Sturdy, covered with a thicker and more elastic skin, without folds or wrinkles. Naturally situated against the chest wall of which they seem to be part.
Forearm: As long as the upper arm, perpendicular to the horizontal, straight with strong bone and muscles.
Pastern joint: Broad and in line with the forearm, without bony prominences or skin folds.
Pastern: Slightly flat, well boned, slanting of 70 to 75° to the horizontal plane .
Front feet: Rounded; with short, sturdy, very tight toes. Fleshy, hard pads, covered by black and rough-to-the-touch skin.

With medium angulation. As a whole, they are strong, sturdy and parallel, creating the image of the great power their function requires. They ensure the proper impulsion and determine the dog's characteristic gait.
Upper thigh: Length proportionate to the whole. Strong and with fully developed and visible muscles. Coxo-femoral angle close to 100°.
Stifles: Set in the same axis as the limb. Femoral-tibial angle close to 110°.
Lower thigh: Slightly shorter than the upper thigh, strong and with similarly developed muscles.
Hock joint / Hock: The tarsus-metatarsus section is short, strong and firm, ensuring powerful propelling of the hind limb. Sturdy hock joint with a noticeable calcaneus (tip of hock). The angle at the hock joint is close to 140°. Sturdy hock, almost cylindrical and at 90°. If present, dewclaws should be removed.
Hind feet: Similar to forefeet, though slightly smaller and broader, but with the same characteristics.

Agile and firm; with noticeable modification when showing interest in something, changing into an erect attitude and responding to reflexes quickly, typical for this breed. Calm walk, extended trot, with a good front suspension and a powerful rear propelling. At gallop, the dog shows all of its energy displaying its power fully. The four feet leave simple, parallel traces. Ambling (pacing) is not accepted and is considered a serious fault. 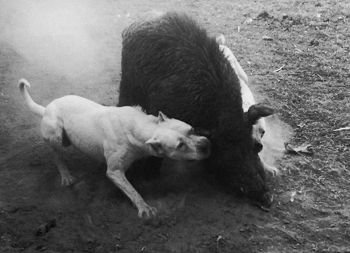 Homogeneous, slightly thick, but smooth and elastic. Adhering to the body through a semilax subcutaneous tissue which ensures free movement without forming relevant folds, except for the neck area where the subcutaneous tissue is laxer. With as little pigmentation as possible, through this increases with the years. An excessive pigmentation of the skin is not accepted. Preference should be given to dogs with black pigmentation of the rims of labial and palpebral mucous membranes.

Uniform, short, plain and smooth to the touch, with an average length of 1,5 to 2 cm. Variable density and thickness according to different climates. In tropical climates the coat is sparse and thin (letting the skin shine though and making pigmented regions visible which is not a cause of penalty). In a cold climate it is thicker and denser and may present an undercoat.

Completely white; only one black or dark coloured patch around the eye may be admitted, provided that it does not cover more than 10% of the head. Between two dogs of equal conformation, the judge should always choose the whiter one.

Any departure from the foregoing points should be considered a fault and the seriousness with which the fault should be regarded should be in exact proportion to its degree.

Male animals should have two apparently normal testicles fully descended into the scrotum.

This site is a member of WebRing. To browse visit here